We had a tricky session at techie heaven a few weeks ago, where we didn’t have enough leaders to run normal activities. I instead bought some popcorn and sat the kids in front my favourite documentary, RIP: a Remix Manifesto by Brett Gaylor (2008). Thanks to Brett for telling me about the additional resources (below) which we used along side the video.

The film covers the area of music copyright in a fairly calm and collected way, however, because the arguments in favour of relaxed copyright and free culture seem so “common sense” to the kids, the overall effect is not especially balanced. The kids are unlikely to come away from this session with strong opinions in favour of aggressive copy-right protection.

The main thrust of the argument is that attempts by the corporations which own the most music and film (in America) to strictly control the media and ideas that “they own” is 1) relatively new and unnecessary 2) preventing natural cultural and creative evolution 3) not a globally accepted norm. The film organizes the argument into four sections, so the watching can be divided up as needed. The film also explains Copyleft very briefly. 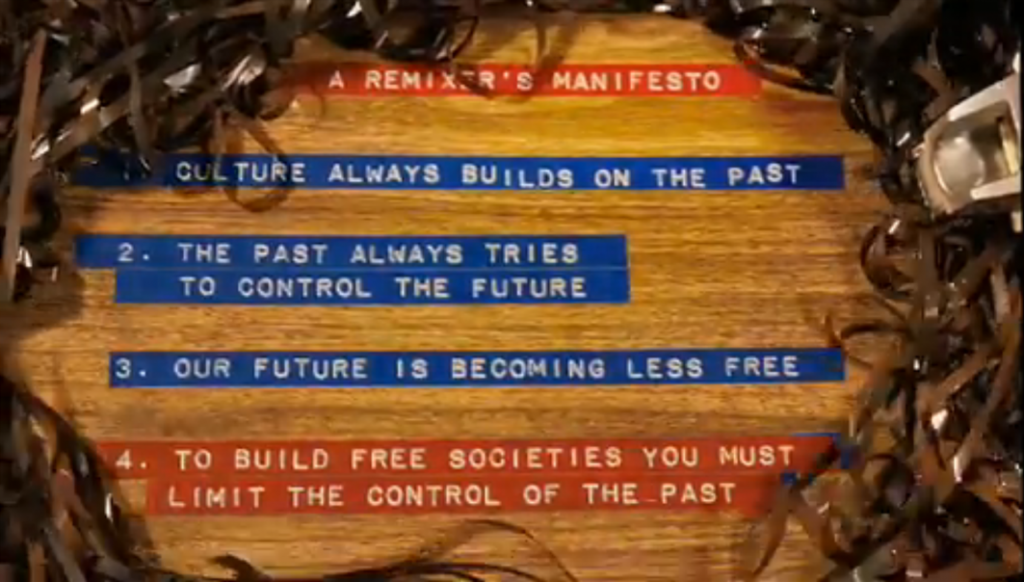 There is a useful discussion based worksheet here, which goes through the film chapter by chapter and presents questions on topics such as technology and media. The kids responded pretty well to the questions, though they are quite advanced in nature – I could see they were having to work quite hard to explain their thoughts however.

We had a good time discussing ways of listening to music: the age range of the leaders meant that bootleg tapes, recording the charts from the radio show and lending vinyl records could be described. Sadly, a lot of the kids don’t really listen to music, because they find it too expensive. Methods such as listening to music from computer games and listening to the music channels were used a substitutes. Consequently, the kids don’t have very strong opinions about music and they have not explored different styles/types very much (much less than I had at their age).

There are some technical tools to play with here, including a popcorn maker video remixing project. The tools are mostly/all web based and suitable for young-ish children as well as teenagers. There are enough things to keep them occupied here for an hour or so.

The film has a lot of animation and music and is really great fun, however some of the dancing is a little sexual and there are a few swear words in the film that need to be skipped or beeped out.